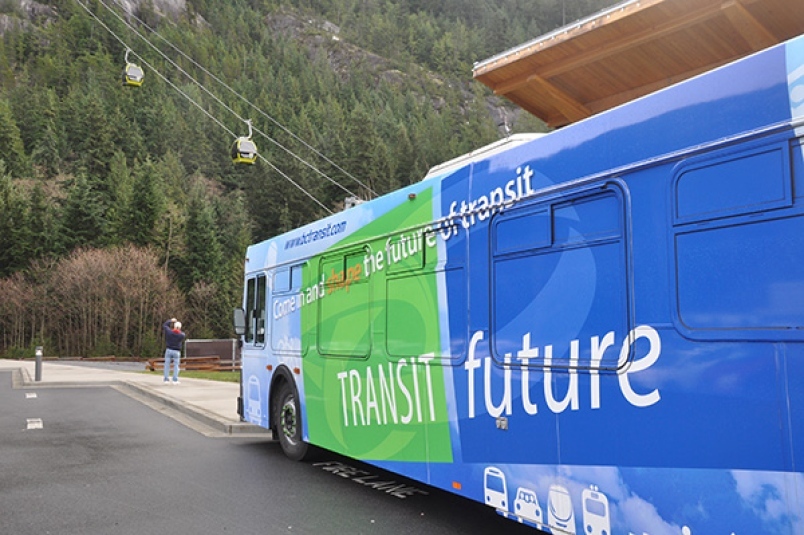 Squamish residents recently had a chance to voice their opinions about a proposed regional transit system connecting the Sea to Sky Corridor with Metro Vancouver.

BC Transit hosted a series of open houses on March 3 at Totem Hall and Brennan Park Recreation Centre on the proposed creation of the regional transit system.

“It’s been an excellent response. It’s clear people are very excited about having proposed transit along the Sea to Sky Corridor,” said Lisa Trotter, South Coast senior regional transit manager for BC Transit.

The open houses were conducted in conjunction with an online survery confucted in late 2016. The survery saw 2.700 responses, 46.4 per cent of which where from Squamish.

“After we’ve conducted the open house we will get information from the online survey that we are currently running until March 6 and we’ll correlate it all into our final report that is due to be out in September of 2017.”

Jordan Sturdy, MLA for West Vancouver-Sea to Sky, was also in attendance during the open house. During his time as mayor of Pemberton, Sturdy was in support of a regional transit system between Pemberton and Whistler and says that he is fortunate to now be in a position to advocate and support a regional transit network on a much larger platform.

“I have been vocal about the need for regional transit for a long time,” said Sturdy. “The Sea to Sky is the next logical extension of regional transit in terms of BC Transit services. It just makes sense.”

The public engagement incorporated the Sea to Sky Transit Future Plan, a 25-year strategic plan that was developed by BC Transit in collaboration with the District of Squamish, Squamish-Lillooet Regional District, Whistler, Pemberton, the Lil’wat Nation and the Squamish Nation.

Sturdy expanded that the goal of the open houses and the public consultation process it to begin to bring all of the partners together.

“We have four local governments here in Squamish and we need to ask what does that transit authority management body look like? How is it made up and how are decisions going to be made?” said Sturdy.

With a doubling in population in Squamish in recent years, according to Study, the impacts on traffic up and down the corridor are potentially vary significant. Sturdy adds that it is important to provide alternatives and minimize the number of people who are travelling, especially alone in a vehicle.

“We are now beginning to see that demand on the transportation system in the Sea to Sky. [The area] is going to continue to grow and we need to anticipate that demand and seek to put in place options and alternatives that serve the communities and serve the region,” added Sturdy.

“And I think there is a willingness now to look at these kinds of opportunities in a way that we haven’t in the past.”

Featured Photo: FILE photo BC Transit has been conducting open houses throughout the Sea to Sky Corridor this past week on the potential of a regional transit system.