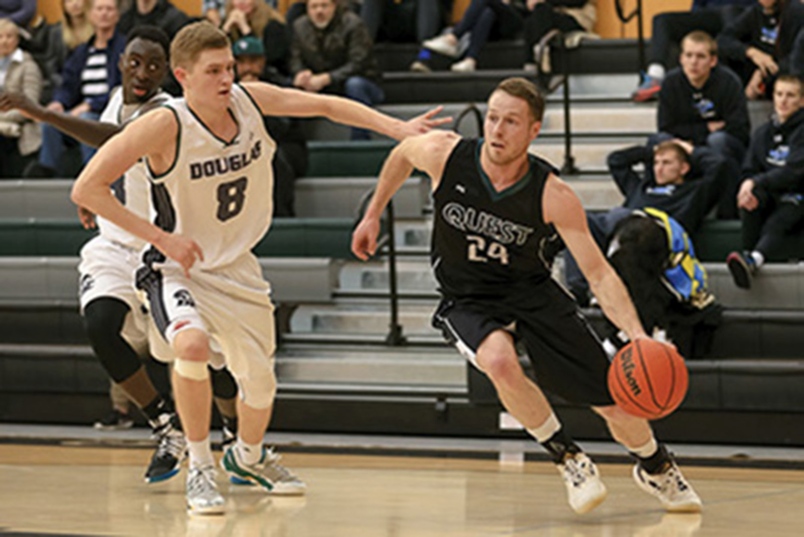 With one minute and 14 seconds left in the final quarter of the PACWest men’s quarter-finals the Kermode’s where down 82-71. The last minute of game play, which lasted for three minutes and 48 seconds, through fouls, cheers, jeers and timeouts was action-packed and filled with suspense. By the last 8.6 seconds the final score had been set at an 80-86 loss for the Quest Kermodes – they had been eliminated from this years provincials. Despite the loss, the crowd erupted in applause and a standing ovation for the men’s Kermodes basketball team. It was clear that this wasn’t just a basketball team – this was a family.

“We wish that things would have went differently and we worked hard and we gave it our all,” said Theo VandenEkart a senior member of the Kermodes Athletics program from Sultan Washington. “It’s tough right now, but something that we talked about in the locker room, is that it’s so much more than just basketball. It’s about having each other and being a family.”

This season hasn’t been easy for the men’s team either. With a new coach, only one new rookie on the team and only eight players on roster, the Kermodes have had their backs against a wall the entire season, according to VandenEkart. 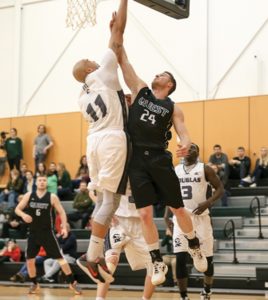 Quest Kermodes Men’s team senior player, Theo VandenEkart tries to block Malcolm Mensah from scoring during their game against the Douglas Royals during this weekends PACWest Provincials hosted at Quest.

“It’s been one of the most challenging seasons that I’ve been a part of,” said VandenEkart.

“But at the same time we’ve kind of learned to keep fighting. I think having that challenge helped us kind of know that we can overcome challenges like that in the future.”

According to Chris McAlpine, a second year member of the team from Richmond, B.C., the season has had a number of challenges that the Kermodes have been fighting to overcome.

“Most of our guys are accustomed to our old coaches style, so getting accustomed to a new style it was a really good learning opportunity for our team to be put into a new environment and really have to adapt well to what’s going on around them,” said McAlpine. 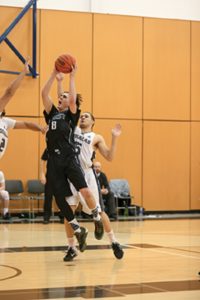 Quest Kermodes Men’s team second year player, Chris McAlpine makes for a determined and energy filled shot during their game against the Douglas Royals during this weekends PACWest Provincials hosted at Quest.

VandenEkart said that what it ultimately came down to was getting the stops and shots that they crucially needed in the final minutes of the game.

“We cut the lead to five or four or three and then they would pull away a little bit and then we would cut it back down again,” said VandenEkart. “We just couldn’t get over that hump of tying the game or getting ahead and we where never able to get that one shot or that one stop that was going to just push us over to where we need to be.

If you are fighting and not giving up even though things aren’t going your way that’s what’s important, added VandenEkart. It’s something that the Kermdoes have been facing all season.

”I’m just really thankful. I’m thankful for my time at Quest, and all of the friends that I’ve made and everyone that has been there for me and helped me through this process,” said VandenEkart. “I couldn’t have survived at Quest without the guys on the team, and just having that group of people that can help me get through those things. I definitely couldn’t have made it or survived here without that.”