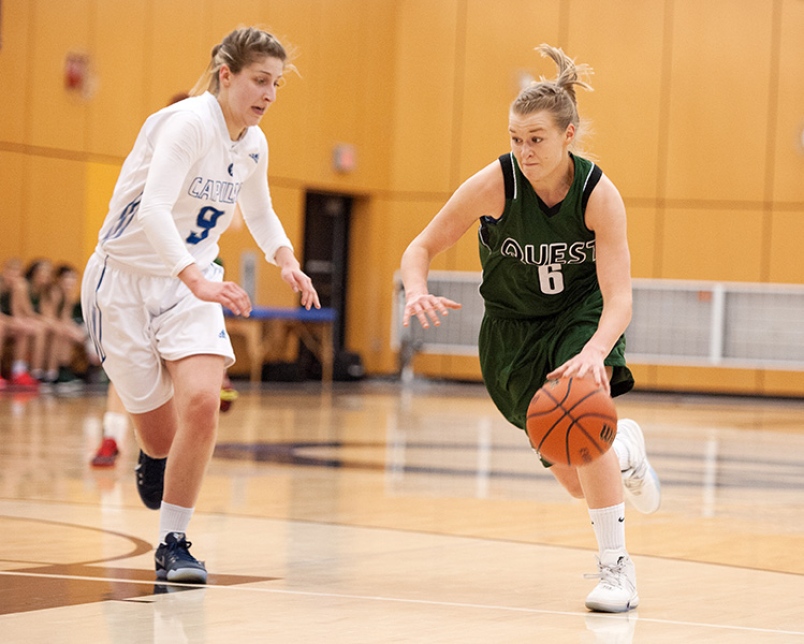 The bleachers were packed with family, friends, fans and the occasional giant cardboard cutout head this past Saturday night at the Quest University gym as the Quest Kermodes’ Senior’s final home game of the regular PACWEST season was played out against the Capilano Blues.

The men’s team said goodbye to four of their members, Dallas Searles, Theo VandenEkart, Paul Getz and Noah DeRappard-Yuswack, with a 93-90 victory against the Blues. The women’s team wasn’t able to capture the same.

With a loss of 77-68, sole women’s team senior player Tessa Needham said, “It was a little bit bittersweet to be honest. We didn’t really get the win that we wanted, but at the same time it was really nice to reflect on my four years and kind of go out there and play for my team and Dany who’s been there for me for four years.”

During the annual Seniors Night Ceremony, Quest Women’s Basketball coach Dany Charlery made a presentation on behalf of the Quest community and Quest Athletics to thank Needham for her four years in the program.

“Tessa has a work ethic unlike any other that I’ve coached here at Quest,” said Charlery. “She has a passion to compete and a willingness to do what it takes to win.”

But it hasn’t been an easy run for Needham. Last year she suffered a severe and life changing injury.

Needham lost sensation on the entire left side of her body, from her toes to her ribs.

“It was a scary moment. I was like, am I ever going to get that sensation back? Am I ever going to be able to play basketball again or the way I could before? I couldn’t run the same and none of the doctors could really tell me yes you’ll gain that back or no you won’t,” said Needham. “I’m so thankful for Danny, he’s been an incredible coach these past four years.”

Charlery said it was through her mental toughness, her perseverance and her commitment to overcome her injury that led Needham back to the court for her senior year.

Needham says she hasn’t given up on this year either. With provincials gearing up next month she thinks the Women’s team has a serious chance to beat the competition.

“If we do the right things and play the way we can we should be able to beat every team,” said Needham. “It’s anybody’s championship and I think this provincial tournament is going to show a lot about what we can do.”

It will include both men’s and women’s qualifying basketball teams from the PACWEST conference. For more information, stats and game schedules, visit www.pacwestbc.ca.